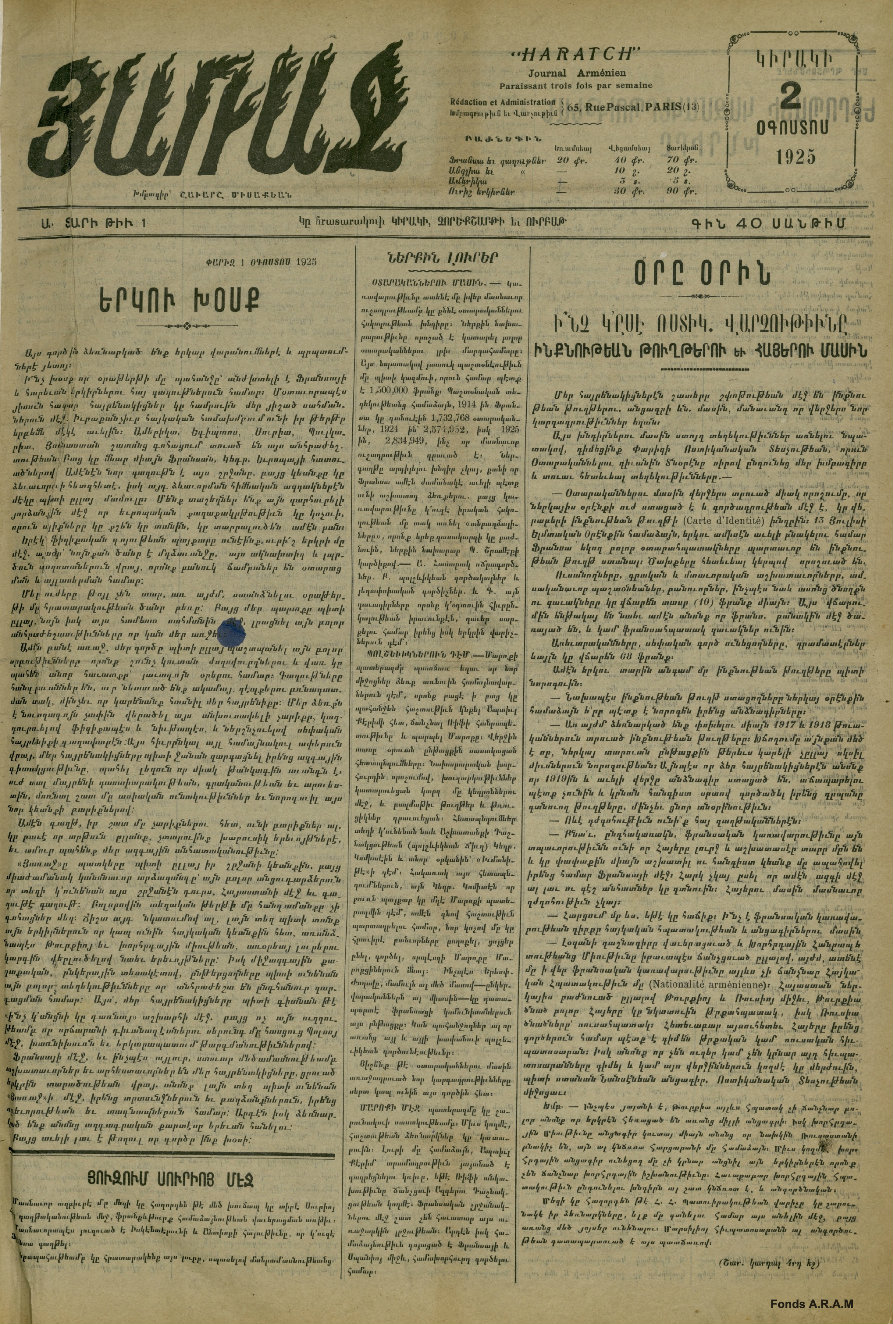 The Association for the Research and the Archiving of Armenian Memory (ARAM) has undertaken the digitization of all the issues of daily newspaper Haratch (22214 pages / 600 Go). This work started in 2011 and progressed step by step.

The association owns the complete collection of the newspaper and was authorized by Ms. Arpik Missakian to carry out the digitization process and its diffusion on webaram.com

A partnership has been established with BULAC (curator of Haratch original bookbinded issues) to enable digitization in the best conditions.

Haratch (meaning « go forward” in armenian) was the first Armenian-language daily newspaper in Europe, founded by Schavarch Missakian in Paris, 1925. Schavarch Missakian died on January 26th, 1957, Haratch announced his death in the Tuesday 29th January’s n° 7794 issue. His only daughter Arpik Missakian took over fromhim to the newspaper’s management in January 30th, 1957.

Haratch published its latest issue on May 30th, 2009 from a total of 22,214. The cast metal type fonts and the last 2 cast iron marbles including the composing sticks and formes of May 30th, 2009’s last issue were offered up to the association by Arpik Missakian and are on display at the association’s headquarters.

Digitization was done by COPEIA. To carry out this work and to supplement the donations it had collected, the association raised several fundings: from the Ministry of Culture and Communication, CEPAC, the Bullukian Foundation (from 1960 to 1969) and especially from the Calouste Gulbenkian Foundation. (from 1970 to 2009).

Haratch (1925-2009) was the first Armenian newspaper published in Europe after the genocide. It has experienced exceptional longevity. Vector of identity, link between the survivors, link between the lost world and the host country, it quickly became the pillar of the Armenian press. Founded by committed journalist Schavarch Missakian (1884-1957), the newspaper was a witness to the great and small events of the Armenian community and a major contributor to the Armenian literary society in Europe. Spanning two generations, only interrupted during the years of the Occupation, the founder and his daughter Arpik have succeeded in enabling the newspaper to play a great role in the construction of an Armenian identity in exile, at the core of an European network of brilliant intellectuals.